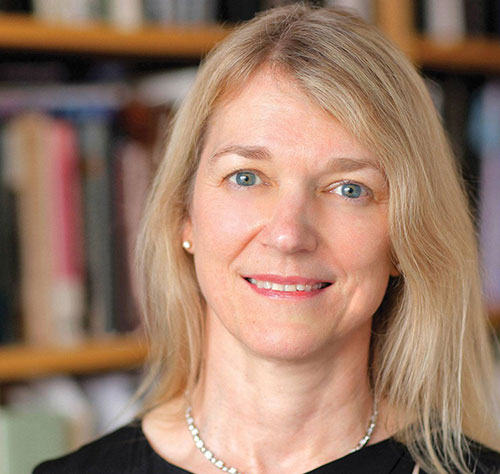 Cori Bargmann is a neuroscientist and geneticist. She received a BS in biochemistry from the University of Georgia and a Ph.D. from the Massachusetts Institute of Technology, where she studied the neu/HER2 oncogene with Robert A. Weinberg. Her work on the neurobiology and genetics of behavior began during a postdoctoral fellowship with H. Robert Horvitz at MIT. She has studied the relationships between genes, circuits, and behaviors in the genetically tractable nematode worm Caenorhabditis elegans as a faculty member at the University of California, San Francisco (1991-2004) and at the Rockefeller University as the Torsten N. Wiesel Professor and Head of the Lulu and Anthony Wang Laboratory of Neural Circuits and Behavior (2004-present). She was an HHMI Investigator from 1995-2016. Highlights of her lab’s work include identifying the first direct link between an olfactory receptor protein and an animal’s odor recognition, demonstrating that a pre-patterned map of olfactory and taste preference converts sensory perception into stereotyped behaviors, elucidating the circuit logic connecting odors to fixed and variable behavioral responses, mapping natural trait variation in social and foraging behaviors to receptors for neuromodulators, and discovering many molecules involved in nervous system wiring, including a “matchmaker” for synaptic specificity. This work has been recognized by scientific honors including a 2012 Kavli Prize in Neuroscience and the 2013 Breakthrough Prize in Life Sciences. In 2013-2014, she co-chaired the NIH working group to the Advisory Committee to the NIH Director for President Obama’s Brain Initiative. In 2016 she joined the Chan Zuckerberg Initiative as its founding Head of Science. This philanthropy supports basic science and technology that is aimed toward a long-term goal of making it possible to cure, prevent, or manage all diseases by the end of the 21st century.

What is the right level of analysis for understanding the brain?  How do genes, neurons, and circuits encode information, modify it based on context and motivational states, and use that combined information to drive flexible behaviors?  Answering these questions across temporal and spatial scales is daunting in the complex human brain, but more straightforward in the simple brain of the nematode C. elegans.  Studies of C. elegans foraging behaviors have provided insights into three levels of behavioral variability: the gating of information flow by circuit state over seconds, the extrasynaptic regulation of circuits by neuropeptides and neuromodulators over minutes, and trajectories that remodel behavior over development.