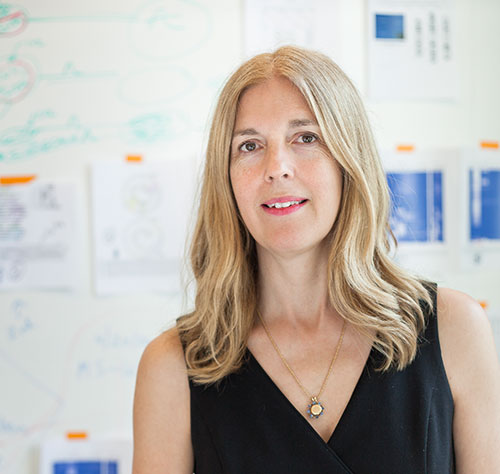 Leslie B Vosshall is the Robin Chemers Neustein Professor, Head of the Laboratory of Neurogenetics and Behavior. She has been an investigator of the Howard Hughes Medical Institute since 2008, and in 2022 will become the Vice President and Chief Scientific Officer of HHMI. She received an A.B. in Biochemistry from Columbia University in 1987 and a Ph.D. from The Rockefeller University in 1993 working with Michael Young. Following postdoctoral work at Columbia University in the laboratory of Richard Axel, she joined the Rockefeller faculty in 2000. She is the recipient of the 2008 Lawrence C. Katz Prize from Duke University, the 2010 DART/NYU Biotechnology Award, the 2011 Gill Young Investigator Award, the 2020 National Academy of Sciences Pradel Research Award, and the co-recipient of the 2020 Alden W. Spencer Award with Kristin Scott. Vosshall is an elected fellow of the American Association for the Advancement of Science and was elected to the National Academy of Sciences in 2015 and the National Academy of Medicine in 2021.

Title of talk : Neurobiology of the World’s Most Dangerous Animal

My group is interested in the molecular neurobiology of mosquito host-seeking behavior. Female mosquitoes require a blood meal to complete egg development. In carrying out this innate behavior, mosquitoes spread dangerous infectious diseases such as malaria, dengue, Zika, chikungunya, and yellow fever. Humans attract mosquitoes via multiple sensory cues including emitted body odor, heat, and carbon dioxide in the breath. The mosquito perceives differences in these cues, both between and within species, to determine which animal or human to target for blood-feeding. We have developed CRISPR/Cas9 genome-editing in the Aedes aegypti mosquito with the goal of understand how sensory cues are integrated by the female mosquito to lead to host-seeking behavior. Some of the questions we are currently addressing are: Why are some people more attractive to mosquitoes than others? How do insect repellents work? How are multiple sensory cues integrated in the mosquito brain to elicit innate behaviors? Recent advances from my group in analyzing the molecular biology of host-seeking behavior will be discussed.