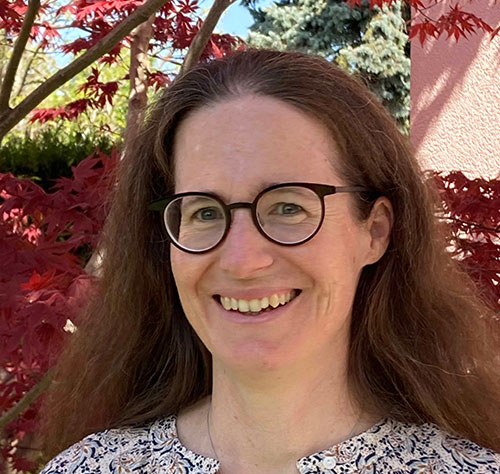 Sophie Martin earned her Diploma in 1998 from the University of Lausanne for her study of chromatin organization in the laboratory of Dr Susan Gasser at the Swiss Institute for Experimental Cancer Research (ISREC). She then joined the group of Dr Daniel St Johnston at the Wellcome/CR UK Gurdon Institute to study the molecular mechanisms of cell polarization and mRNA localization using Drosophila as model system and received her PhD in 2003 from the University of Cambridge. She obtained postdoctoral training in the laboratory of Dr Fred Chang at Columbia University in New York, studying cell polarization and the cytoskeleton in the fission yeast. In 2007, she joined the Center for Integrative Genomics at the University of Lausanne as a Swiss National Science Foundation Professor. She was appointed Associate Professor in 2010 and Full Professor in 2018 at the Department of Fundamental Microbiology (DMF), of which she is the current director. In 2009, she was elected as an EMBO Young Investigator, in 2012 she received the WICB Junior Award from the American Society for Cell Biology, and in 2014 the Friedrich Miescher award and the EMBO Gold medal. She was elected EMBO member in 2020.

Sexual reproduction is ubiquitous amongst eukaryotes. This requires alternation of cell-cell (gamete) fusion and genome reduction through meiosis. My lab has been using the yeast sexual reproduction pathway to study how cells polarize to find a mate and mount a fusion reaction. In the fission yeast Schizosaccharomyces pombe, sexual reproduction involves the pairing of P- and M-cells, which signal to each other through P- and M-factor pheromones. Formation of cell pairs involves a ‘speed-dating’ strategy, where each partner secretes pheromones at local mobile polarity sites that stabilize upon signal detection. For cell fusion, the two partner cells organize at the site of cell-cell contact a dedicated actin structure, the fusion focus, which serves to concentrate both signaling and cell wall digestion machineries. I will present our recent work describing the architecture of this fusion structure, and how this leads to cell-cell fusion.